Refrigerating fluid is the working medium in a cooling system like central air-conditioning, heat pump air-conditioning, household air-conditioners and other small-sized cooling equipment. The fluid circulates in the system and exchange energy with the outside via changes of its thermodynamic states, so as to cool the system down. Freon, the well-performing refrigerant introduced by DuPont Company in 1930s, used to be a milestone of the development in cooling industry, but studies in 1970s have proved that the chlorine and bromine atoms it contains can damage ozone sphere violently, letting more harmful UV reach the earth. 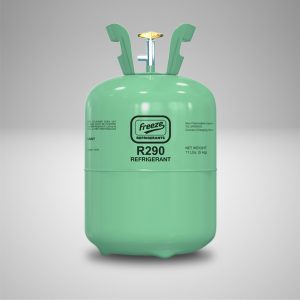 Conventional refrigerants will damage ozone sphere or aggravate greenhouse effect, leading to severer environmental problems. Since that people are paying more attention on environment protection, to find an environmental-friendly refrigerant has become a significant issue for cooling industry.

As a new type of environmental friendly refrigerating fluid, Propane refrigerant R290 is a natural hydrocarbon fluid that can be directly obtained from liquefied gas. Different from synthetic Freon, R290 contains no helium atom, so its ODP value is zero, which means that it`s harmless to ozone sphere. Furthermore, comparing with HFC material which also does no harm to ozone, R290`s GWP value is also close to zero, which means that it has little effect on greenhouse effect. Therefore, R290 has been gradually accepted by governors, and noticed by large air-conditioner manufacturers. China Enterprise News exclusively revealed that Gree has present their propane air-conditioners with R290 as refrigerant in last July, and it improved the energy efficiency by 15%. Meanwhile, Changhong, Midea, Haier, Chigo and other enterprises are also working on developing new air-conditioners applying R290.

Though featured with many advantages, R290 is restricted from mass application because of its being flammable and combustible. The mixture of R290 and the air can be explosive when encountered with heat source or open fire. In order to use it safely, methods like reducing filling volume, isolating from fire and preventing leakage are taken. Since that air-conditioners often require large power, the filling volume of R290 should also be larger, making it dangerous to use. Related studies are still being done to solve this technical problem, but it’s for sure that leakage monitoring can decrease the possibility of propane leakage accidents effectively.

As far as ISweek is concerned, Figaro in Japan has launched a new type of pre-calibrated propane sensing module FSM-10Y-01 for this application. The module applies Figaro`s semi-conductive TGS2610-D00 sensor to measure propane gas within concentration between 0 ~ 20% LEL and has optional output of PWM and USART. Meanwhile, the module can also detect disconnection and short circuit failures in the sensor. Being durable and stable, the module can normally operate in a wide range of temperature, as well as endure silicon compounds and extreme environment conditions. With negligible cross interference of organic gases, the sensor can be used to detect leakage of propane and other combustible gas, or work as industrial gas detectors.