In 2015,  vehicles driven by H2 fuel cells stepped into the first state of commercialization. Toyota Mirai  has been in the market of America and Europe, and is planning to enter China later. In China, performance of fuel cell vehicles can basically meet the requirements of operation, so they have been used in commercial demonstrative operation, and stepped into mass production. However, before introducing a new type of energy system, its security should be the first issue to care about. Hydrogen, being  volatile, combustible, explosive and hydrogen brittle, somehow poses safety risk during use. Additionally, due to lack of experience, the drivers are often doubtful when driving hydrogen fuel cell vehicles. 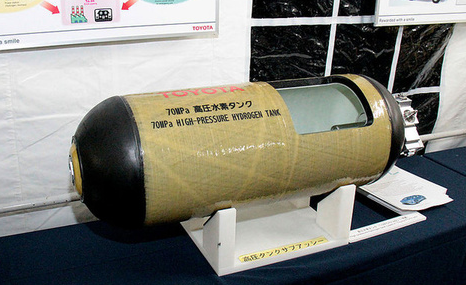 Toyota Mirai equips the hydrogen tank with hydrogen sensor, which can monitor the tank real-time and automatically close the valve when leakage happens.

In order to present the safety of safety of fuel cell vehicles, hereinafter ISweek will make a brief introduction of hydrogen safety,  the security devices they used, and their common sensing application solutions.

There are many standards and specifications for fuel cell vehicles domestically and internationally, among which 65% are about security. Hydrogen safety mainly refers to the safety of on-board hydrogen system during the vehicle’s operation, which includes high-pressure hydrogen supply system and fuel cell power generation. For now, enterprises prevent and control the risk through material selection, leakage detection, ESD protection, anti-explosion and so on.

In the aspect of hydrogen leakage monitoring, the electric components, pipelines and valves of fuel cell vehicles are made of anti- explosion, anti-static, anti-flaming, waterproof and salt spray proof materials. For example, the hydrogen sensor used in these cars are all anti-explosion type instead of contact type, so as to avoid accidents caused by contact sparks.

System safety protection is mainly about the design and installation of security devices on high pressure hydrogen storage bottle and pipelines. At present, on-board safety monitoring of the hydrogen system real-time detects gas leakage, pressure, temperature and electric components of the storage bottle, passenger compartment, fuel cell generator and tail gas emission parts, so as to safeguard the normal operation of fuel cells during adding and using hydrogen.

A hydrogen safety monitoring system basically consists system controllers, hydrogen leakage sensors, temperature sensors, humidity sensors and other elements. During operation, the controllers monitor the security of hydrogen bottle and pipelines, as well as leakage status and performance of the whole vehicle. As long as any abnormality occurs, the controllers will shut down hydrogen supply system to ensure the vehicle’s safety.

When the temperature rise rapidly, there may be fire around the bottle unless it’s due to malfunction of the temperature sensor. In this case, the system controller will make an alarm immediately. Also, the pressure sensor can measure the remaining hydrogen volume in the bottle to ensure the normal functioning of the vehicle. When the pressure drop to a certain value,  it will remind the driver to add hydrogen.

3. Hydrogen system pressure sensor – MEAS MSP340, used to control the hydrogen bottle to ensure the normal operation of the vehicles.