To create the world’s most sophisticated flood monitoring and forecasting system, the Iowa Flood Center (IFC) uses more than 200 Senix ToughSonic 30 and ToughSonic 50 ultrasonic sensors to measure water levels in streams across the state. Data collected from the sensors are automatically sent to the Iowa Flood Information System (IFIS), where the real time monitoring information is integrated into an advanced hydrological model. System data and river stage hydrographs are shared with the public and emergency management officials.

With easy online access to the water level data from the sensors, Iowa residents and state agencies can now get the reliable, real-time information they need to manage flooding in their locales. The IFC needed a reliable and cost-effective way to get accurate, real-time stream-level readings. Project Engineer Daniel Ceynar decided to try Senix ultrasonic sensors because they had been used for years for water level measurement in the hydrology research labs at IIHR Hydroscience & Engineering at The University of Iowa. The University of Iowa has long been a world leader in hydrological research.

Senix ultrasonic sensors were selected because they are designed to easily integrate with other equipment; in this case with the system’s cellular modems, solar panels, on-board clock, and other equipment. Senix sensors also were also chosen for their ruggedness, programmability, and the reputation of Senix for excellent engineering support. “Senix sensors and the Senix technical team have been pivotal to the success of this project,” Ceynar said, noting that the IFC and Senix worked closely to design a special threaded collar for the ToughSonic 50 so it could be mounted to the IFC Stream Gauge enclosure using the same threading as the ToughSonic 30. That ToughSonic 50 Rear Mount model has since become a standard product for Senix. 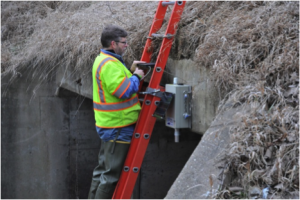 The sensors are programmed for a measurement interval of between five minutes and an hour, using a boxcar average of a preset number of individual measurements. The system sleeps until it’s commanded to wake up to take measurement data and send it to the IFIS. Sensor data is provided using RS-485 serial data communications.

The entire IFIS flood warning system depends on the ruggedness and reliability of the Senix ToughSonic sensors and the IFC system. The Senix sensors are potted in water tight stainless steel housings and operate in 0-100% humidity over a temperature range of -40 to +70°C.

After assembly in the IFC lab, each stream gauge is submerged for three days to verify that it is water tight. This testing has proven useful. In the field numerous sensors have been submerged by flash flooding and once the flood waters subsided the sensors resumed sending correct stream level data without requiring any repairs.

“Once installed, the IFC stream gauges are practically 100% maintenance free,” Ceynar said. “Most stream gauge sites have not been re-visited since they were installed, 4+ years ago.”

The Senix ToughSonic sensors have provided the IFC and the people of Iowa with critically important data for forecasting floods and managing the situation after flooding has begun. “The system—stream gauges and other Hydromet data—is routed through the IFIS where it is regularly used by all levels of government, law enforcement and the general public,” Ceynar said. “We’ve had first-hand experience working with our local emergency management coordinator during floods in 2013 and 2014 where we participated in the daily briefings using IFIS.” The stream gauges identify where the crest of the flood is located and track the crest as it approaches sensitive roads, bridges and towns.

Before the system was in place, it was common for emergency personnel to be dispatched to assess the flooding in threatened locations. But with the stream gauges collecting the data in real-time, emergency responders can focus on helping people instead of tracking flood waters.

See a video of a Stream Stage Sensor in action:

Iowa Flood Center a model for the world 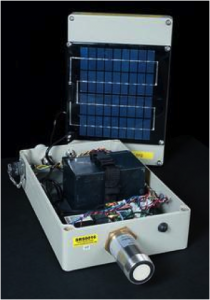 Ceynar and his colleagues have been contacted by officials from other states, and from countries as far away as Australia. The stream gauges are also being evaluated by the Washington State Department of Transportation.

The State of Iowa is clearly on the forefront of flood control monitoring systems that allow everybody from private landowners to emergency personnel to make informed decisions during a flood event. “The IFC is the only flood center in the US, and IFIS is the only system of its kind that we are aware of,” Ceynar said. “We continue our efforts to create a National Flood Center.”

Senix is proud to work with innovative research and educational institutions like the University of Iowa both in the lab and in the field.