With the advance of economy level, people’s living standard has also been increased, the demand for aquatic products is becoming greater and greater, more and more people are engaged in aquaculture business and the scale of this industry keeps showing an rising trend, meanwhile the types of aquatic products have also become very diversified.

So generally the traditional breeding method for aquaculture is to judge whether there is enough oxygen in water by observing the floating heads condition of fishes and shrimps, to decide the contents of ammonia nitrogen according to the turbidity of water, to judge the pH value and temperature of the water based on experience, so as to start the aeration device manually. However, with the development of consumer market and the extension of the scale of aquaculture, more and more issues arise from this traditional breeding way of aquaculture. The key factors that affecting the environment of aquaculture are temperature, light, dissolved oxygen, ammonia nitrogen, sulfides, nitrites, pH value and so on. Such factors are intangible so it is difficult to accurately control them, and if only by depending on experience to judge, the error would be quite significant. Besides, as the scale of aquaculture is becoming larger and larger, purely relying on this traditional method seems to be more and more powerless; any carelessness would possibly lead to heavy losses. 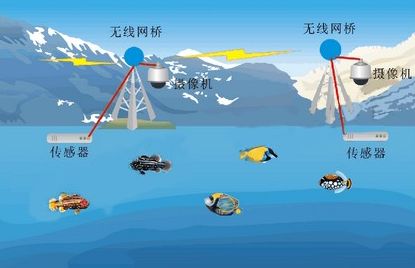 For the above reason the writer hereby would like to introduce to you a large distributive type remote and comprehensive monitoring & management system for aquaculture. So the system is based on computer hardware with software processing being its core part, it has multiple sensors’ signal acquisition systems, automatically controlled aeration system, field video acquisition system, sound and light alarm system, SMS warning notice system as auxiliary parts, collecting multiple parameters for computer processing, fixing issues when abnormal conditions appear. For example, the aeration system would be initiated if there is a lack of oxygen; the heating system would be started if the water temperature is too low; you would be warned with SMS to adjust the alkalinity and acidity if water’s pH value deviates. Even that when alarm sounds the video of the field where the problem occurs could prompt out; you would be able to observe the condition in the field, so as to take efficient counter measures. For all these situations, you don’t really have to be present on the field, but will be able to master them clearly. Through the Internet you can control them at home or elsewhere remotely; such kind of system is very suitable for monitoring and management of large aquaculture.

The major functions and characteristics of the system are as follows, you can choose whatever functions based on your requirements. In order to save costs, you don’t have to configure all of them:

1) Field video function: using IP cameras to gather the situation of different pools (two types of camera, namely above water and under water cameras can be used), enabling all weather video recording;

4) Function of automatic control of liquid level: when the liquid level in the pool is less than the lower limit, the pumping equipment would be activated; once the pool is filled with enough water the equipment would stop automatically. The liquid level of the pond can be shown at any time, when the level surpasses the higher limit, the alarm would also be triggered, so as to prevent the damage caused by floods or other disasters.

5) Function of automatic monitoring of flow: to monitor the water flow of the pond at any time, when the flow rate becomes too small to meet the needs, alarm would be triggered or pumping equipment would be initiated, which is very suitable for ponds which need constant injection of water.

6) Depending on relevant sensors such as water quality sensor, water pH sensor etc chosen, the signals of light, ammonia nitrogen, sulfide, nitrite and pH value can be collected and processed.

7) Infrared radiation function: once there is a suspicious person entering the field, the video would record this and the alarm would be triggered, so as to prevent the happenings of unidentified people stealing fishes, turtles and other precious species, criminals poisoning the ponds or children intruding the spot and falling into the ponds and other undesirable phenomena.

8) Function of locating field position: the video will show the positioning once abnormal situation occurred.

9) Function of alarm with sound and picture: when undesired phenomenon happens, the video and content of the incident would prompt out on the computers in the control room, meanwhile there would also be sound alarm.

11) SMS warning function: when abnormal situation happens, the info would be sent to your mobile. Even you are not in the field, you could still have a knowledge of the condition at any time.

12) Internet function: when you are not present at the spot but want to know the condition there, the Internet function is needed, by using this function you could master all the sensors’ info and videos’ signals.

Speaking of computer hardware before, people tend to think it is a kind of high technology, with prohibitive price of several hundred thousand, several millions to tens of millions. However, with the advancement of technology, computers are no longer that mysterious, and they are applied in people’s daily life at any moment. Our company has developed this very system for aquaculture with reasonable price and flexible configuration options. There is no doubt that you can buy some of the hardware equipments in your local area, but they have to meet the system’s demands, by doing this the commissioning cost can be save and also the maintenance would be relatively convenient. Of course we could offer to purchase all the systems for you, it’s all up to you to decide. We will debug all the devices we provide in the field until they work as expected.