High altitude anoxia has severe influence on people’s ability of thinking. At elevation of 1500m, the thinking ability starts to be affected, presented as restriction on new acquisition of complex intellectual activity. At 3000m, people’s thinking ability comprehensively decreases, especially in judgment. At 4000m, people would write clumsy handwriting in weird grammar. At elevation of over 5000m, people cannot concentrate on something like they usually do.
While the altitude increases, the atmosphere becomes thinner and the barometric pressure decreases accordingly, lowering the oxygen molecular number. (Please note that the above is talking about number of oxygen molecular, but not oxygen concentration.) Consequently, natural reactions of human body are intensified, leading to heart rate accelerates, reaction slows down, get emotional and immunity decreases, and causing symptoms like headache, ventosity, baldness, dyspnea, doldrums, lower sleep quality and hypomnesis. Being on plateau for long may induce high altitude heart disease, high altitude hypertension, or even acute lung or brain edema, which can possibly be lethal.
Under standard atmospheric pressure, the oxygen content in ambient atmosphere is about 21%（the percentage under standard conditions is 20.9%）, and this is also the normal oxygen concentration for human beings who evolve for long and live on plain areas. The oxygen concentration keeps at about 21% from sea level to upper air over altitude of 10000 meters. 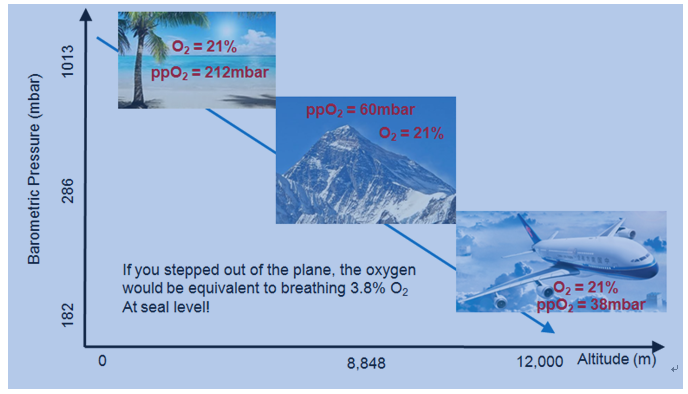 So,
What is it for？
That People get oxygen deficit on plateau where oxygen concentration is 21%?
It’s for that at different altitudes,
The oxygen partial pressure differs greatly.
On plateau, the air is thinner (total air pressure is relatively low), so although the oxygen concentration is the same, the partial pressure is lower than that in plain area. That’s why people get anoxia on highland. Most of us think only about oxygen concentration of oxygen（% vol）. Now after understanding the difference and linkage between oxygen partial pressure and concentration, we can touch the truth of plateau anoxia.
Then, how can people adapt to the plateau oxygen-deficient environment? In this case oxygen fraction indoor shall be increased to improve the oxygen volume fraction in the air.
In recent years, the concept of diffusion type oxygen supply has been raised, and has been realized indoor by pressure swing absorbtion oxygenerator or liquid oxygen evaporator, as a solution for plateau oxygen-deficient problem. By installing indoor control systems, the oxygen concentration can be automatically adjusted.
When interior oxygen concentration reaches the upper limit (26%), oxygen supply system is automatically shut off; when oxygen enrichment is lower than the lower limit, the system is automatically started.
Therefore, it will be very important to monitor interior oxygen enrichment (which is based on oxygen partial pressure). For now most diffusion oxygen generating systems and oxygen enrichment systems are based on electro-chemical principles. However, the lifespan of electro-chemical oxygen sensors are relatively short, and the output of these sensors will attenuate with time goes by. This is a severe drawback that limits the development of such technology.
The oxygen sensor for diffusion oxygen generating system is required for high accuracy, high repeatability, long lifespan and no pressure dependence. It should also be easy to use and needs few maintenance and calibration. To meet these demands, SST company in Britain has developed oxygen sensor LOX-02, which is based on principle of fluorescence quenching. The fluorescent oxygen sensor is designed based on principle of fluorescence quenching. Oxygen absorbs the blue part of spectrum in ray of light. Fluorescence of the special ruthenium compound stimulated by oxygen gets quenched, so that the strength of light is changed in relation to oxygen enrichment. Detection based on principle of optic oxygen, such sensors has no effects on ambient gas to be detected, and consumes no oxygen, which is greatly different from conventional oxygen sensors which consumes oxygen and change the proportion of ingredients of tested gas. Accurate value of oxygen partial pressure can be obtained by demarcating the time that strength of light is changed, and this value will not be influenced by pressure change. During demarcating the oxygen concentration, the sensor is completely inert and has no consumption on oxygen to be detected, while, the implanted pressure chip and software has calculated the concentration value. To read the value of oxygen partial pressure, barometric pressure and oxygen concentration, only a command is needed.